Domo is a weird dog that looks like his owner Kaz, because they both wear glasses. He doesn't respond to too many thing and looks innocent, But when he sees food he runs to it and eat it all up.

In the episode "Domo" Kaz bought Domo as one more pet. He and Ami adore him alot, but Yumi, Jang Keng, and Tekirai didn't want him in the bus. They thought that Domo only understands the order "Stay" but when he saw cat food, he ate it from the cats. Later on, Yumi was suppose to look over Domo, but he left the bus, without attention. He goes everywhere to find food, and When Ami, Yumi, and Kaz arrived at a spot Domo was in already, people blame Kaz because they got mixed up with him and Domo, which Kaz cannot see or spot. At the end Kaz signs a contract of money, and Yumi admits that there is no problem having one more pet, yet Jang Keng and Tekirai still refused. 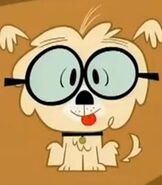