Unknown
Julie Hinikawa was a keytarist in the Puffy AmiYumi band before her departure. She came back in the episode Hi Hi Puffy Julie AmiYumi. She played the red keytar and planned to get rid of Ami and Yumi.

Julie has dark green eyes and lime green hair that she ties into a ponytail. She wears a white midriff shirt with a red "no" symbol on it, a black leather jacket, blue jeans with dark pink pockets and black boots.

Julie is a one-shot character from the show.

Julie was part of the band with Ami and Yumi a long time ago. As the tours went on, people have grown to worship Ami and Yumi much more than her. Her name wasn't even included in the band's name.

Since then, Julie started to plot Ami and Yumi's destruction. She forgets Ami's name and calls her Arthur and she hurts Ami in various ways. She puts on the innocent act so nobody would think she's doing it on purpose. She fails to get rid of Ami and Yumi and the audience boos at her when she said that she was the real star. She freaks out, saying that that's not love but mean. Julie talks to her keyboard calling it Keyboard Guitar and she dresses it up in a hat and glasses. Julie was insane enough for Kaz to put her in a straight jacket. She was last seen talking to her keyboard guitar swearing revenge.

Julie is very evil and crazy, but the truth is, she only wants to be loved like Ami and Yumi, though it is never explained how the audience did not notice her that much. She got along well with Yumi, but was disliked by Ami because of how Julie carelessly mistreated her and how she keeps forgetting Ami's name, even going as far as mispronouncing it as "Arthur".

Julie is able to drive the tour bus like Ami and Yumi. She can even lift them and all of their instruments with only one finger. Julie is also known to be a tactical genius. She was planning to flatten both Ami and Yumi like a pancake with the amp she placed on her "Puffy JulieYumi" sign. She knew Ami would come to Yumi's aid. 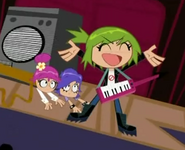 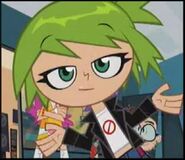