Secret Origin / Legend of Mei Pie / Under the Hood

View source
watch 01:54
Obi-Wan Finale - The Loop
Do you like this video?
Play Sound

Secret Origin / Legend of Mei Pie / Under the Hood consist of the 27th episode of Hi Hi Puffy AmiYumi.

Secret Origin / Legend of Mei Pie / Under the Hood

Young Ami and Yumi get off a bus and arrive at Camp Youwannasushi. They meet Atchan after Yumi rescues him from the camp bully by violently stomping on his foot. Atchan reveals he didn't have much confidence in himself in his childhood because he wasn't a superhero. Ami finds Atchan to be sweet, sad and funny while Yumi thinks he's crazy. After not taking Atchan's warning about the bunk bed monster, Rumaki (a monster that takes kids from the bunk bed Ami and Yumi were assigned to, to work in his rock candy mines) seriously, Yumi is kidnapped by Rumaki and Ami and Atchan set out to save her. Yumi, being in a sack, thinks this is a prank.  After encountering Rumaki's army of giant dust monkeys and being taken to the rock candy mines, where they meet the very old campers of Youwannasushi, Ami and Atchan set out to rescue them as well. Atchan faces off against Rumaki, and with the help of Ami and the elder campers, Atchan starts believing that he is a superhero with powers. Rumaki surrenders, promises to never kidnap another kid again, and Ami, Yumi Atchan and the elder campers return to the camp room. They got Yumi out of the sack. Yumi thinks this whole thing was a prank. Atchan attacks Yumi when he was telling the story of how he beat Rumaki to the elder campers, which has Yumi saying Ami has created a monster instead of a monster fighter. 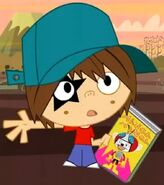